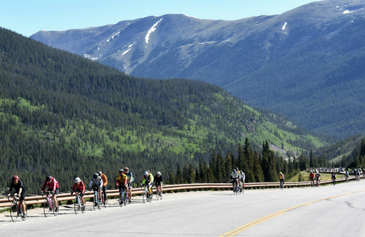 The 33rd Annual Tour Featured a Loop Route
For six beautiful days in June, more than 2,000 cyclists navigated through the Rocky Mountains taking in the views from their bikes. The 2018 Denver Post Ride The Rockies Bicycle Tour presented by Flexential, was held June 10 – 15 and took cyclists through the host communities of Breckenridge, Edwards, Steamboat Springs, Grand Lake and Winter Park. The 33rd Annual Tour was planned as a Loop Route close to the I-70 corridor, to make it more accessible to riders on and off the bike. This Tour included 418 miles and added 25,935′ of elevation for the riders.

Prior to the Tour, the 9th Annual RTR Prologue Experience, a premier fundraiser for The Denver Post Community Foundation, took place with participants riding alongside celebrity cyclists over Hoosier Pass into Fairplay, all while discovering the gold rush in the restored mining town of South Park City and touring the Old Country Boy Mine, one of the largest and most famous gold mines in Breckenridge.

Throughout the Tour each year, Ride The Rockies and The Denver Post Community Foundation are proud to grant $5,000 to a deserving nonprofit organization in each of the host communities. You can see the recipients from 2018 in the Grant Corner section below.
The 2018 Tour had 48 states represented and had four riders from Jersey, a smallisland in the English Channel. The eldest RTR cyclist was 84 years old and there were seven others over the age of 80! The youngest participants (there were four) were 9 years of age. The dates for 2019 have already been announced, June 8 -15, 2019.
Proceeds from Ride The Rockies benefit The Denver Post Community Foundation. To view photos from the 2018 Tour, click here. For more information about Ride The Rockies, click here.
https://www.denverpostcommunity.com/wp-content/uploads/sites/3/2018/08/2.png 237 365 sschafer https://www.denverpostcommunity.com//wp-content/uploads/sites/3/2014/02/dpcHeaderLogo-300x96.gif sschafer2018-08-17 20:57:142018-08-17 20:57:14The 2018 Denver Post Ride The Rockies
Passport To The Arts Fall 2018