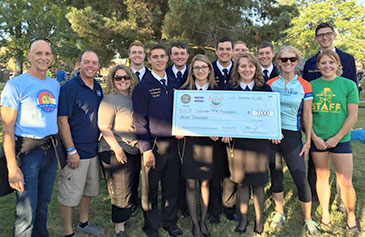 The Denver Post Community Foundation and Pedal The Plains were proud to present a $7,000 grant to the Colorado Future Farmers of America Foundation on Friday, September 16 in Fowler, Colorado. 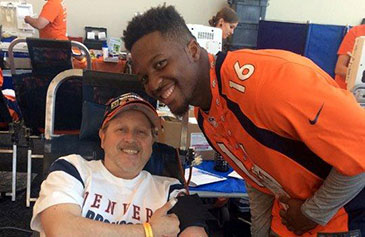 Broncos Fans Are Just The Right Type
Every two seconds someone in the United States requires a transfusion of donated blood. 2016 will be the 19th year of Drive for Life, the Denver Broncos Community Blood Drive with Bonfils Blood Center and the largest single-day blood drive in the history of Colorado. Drive for Life will be held at Sports Authority Field at Mile High from 8:00 a.m. – 5:00 p.m. on Tuesday, November 1, 2016. At Drive for Life 18, more than 5,100 lives were saved or enhanced due to the 1,710 donations collected from generous donors throughout the event. The Denver Post Community is proud to support Drive for Life!
For more information on Drive for Life, click here.
https://www.denverpostcommunity.com/wp-content/uploads/sites/3/2016/09/DFL-donor_player.jpg 237 365 sschafer https://www.denverpostcommunity.com//wp-content/uploads/sites/3/2014/02/dpcHeaderLogo-300x96.gif sschafer2016-09-29 20:38:162016-09-29 20:38:1619th Annual Drive For Life Blood Drive to be Held Nov. 1 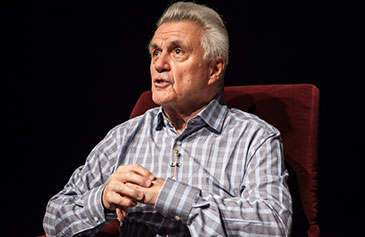 Award Winning Author Welcomed by Sold-Out Crowd
On Monday, September 26, the crowd of loyal Pen & Podium subscribers and guests were introduced to John Irving, a self proclaimed “worst case scenario” type of writer. He said “you think that was bad, just wait!” Mr. Irving was genuine, funny, and honest about his writing process and his life story. Prior to the conversation moderated by Jeffrey Neuman, award winning playwrite and Pen & Podium Book Club host, Mr. Irving enjoyed meeting with subscribers and guests of Pen & Podium sponsor, Northwestern Mutual at a VIP Reception on stage. He also spent time getting to know our nonprofit grantee for the evening, Colorado Humanities. It was a great beginning to an exciting Pen & Podium season. Irving will be followed by world renowned authors: Lauren Groff, Anthony Doerr, Mary Karr, and Julia Alvarez.
Proceeds benefit The Denver Post Community Foundation. For more information on Pen & Podium, click here.
https://www.denverpostcommunity.com/wp-content/uploads/sites/3/2016/09/irving.jpg 237 365 sschafer https://www.denverpostcommunity.com//wp-content/uploads/sites/3/2014/02/dpcHeaderLogo-300x96.gif sschafer2016-09-29 20:35:172016-09-29 20:36:06John Irving Kicks Off The Denver Post Pen & Podium Series

The 154 mile, three-day ride took more than 850 cyclists through the southern Colorado towns of Ordway, Fowler, and La Junta for the 5th anniversary of the event. With close to 20 educational stops and signage along the route, the riders were immersed in rural highlights, trivia and fun facts to keep them pedaling down the country roads. During the safety overview came the warning to look out for snakes and tarantulas crossing the highways, two things no cyclist would want to run over! One of the many benefits of taking part in Pedal The Plains is the focus on featuring locally grown ingredients all weekend, honoring the pride and rich culture the plains have to offer.
The Denver Post Pedal The Plains Bicycle Tour is produced in partnership with the Governor’s Office. Governor John Hickenlooper and former Publisher and current Chairman of The Denver Post Dean Singleton dreamt up this event over a discussion on how to showcase the culture and beauty of eastern Colorado. The Governor refers to Pedal The Plains as “The Ride For The Rest of Us,” as a nod towards The Denver Post Ride The Rockies Bicycle Tour through the majestic Rocky Mountains. Each year Pedal The Plains grows in numbers and each year the cyclists are treated to the charm and hospitality from some of the friendliest people in Colorado.
Proceeds benefited The Denver Post Community Foundation. For more information on The Denver Post Pedal The Plains, click here.
https://www.denverpostcommunity.com/wp-content/uploads/sites/3/2016/09/PTP-finish.jpg 237 365 sschafer https://www.denverpostcommunity.com//wp-content/uploads/sites/3/2014/02/dpcHeaderLogo-300x96.gif sschafer2016-09-29 20:33:062016-09-29 20:36:39Celebrating Another Great Finish for Pedal The Plains